So our Rocky Point flip (aka the House on the Hill) has hit the market. Listed at $289,990 this house was purchased through our direct marketing campaign. Overall this was a pretty smooth rehab.  That said however we went above what I initially projected we would do both in scope of work as well as cost. In the end though, it is about doing the project the right way.  I’m very cognizant of the fact that one’s home is their most valuable asset as well as where families spend the most time, so you have to take the utmost care with renovations.

What Work Was Done to the House?

Originally the house was a 3 bedroom 1 bath home with an additional space that could be considered a 4th bedroom.  The 1 bathroom however was quite small to say the least.  It was actually pretty remarkable that the previous occupants of the home were able to bathe and get dressed in such a confined area.  We decided to take this “4th bedroom” and convert it into a full bathroom with a tub and stand up shower.  Below is a side by side comparison.  In regards to the existing bathroom, we decided to just make it a half bathroom which is really what the space calls for.  Ultimately, I think this was the right call on a number of fronts.  First off a sprawling bathroom will never hurt your appeal to a potential buyer and secondly a house with an extra half bath makes a world of difference to a family, especially those with children. 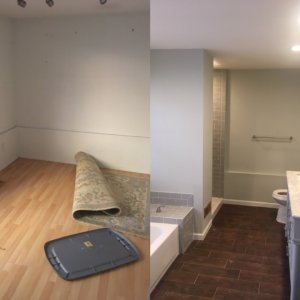 As far as the kitchen, my original plan was to leave the cabinets and just change the counter tops, appliances and install a back splash.  After some additional examination we decided that we would utilize chalk paint and paint the cabinets a light grey.  The expense wasn’t too drastic, but it altered the look of the kitchen completely.  The before and after picture belows says it all.  A lot of people are skeptical of painting cabinets, and will simply say why not just replace them?  I understand the sentiment, but it is still several thousand dollars for cabinets and that does not include the install.  I don’t know about you, but if something is still in really good shape and is not outdated, I have a hard time throwing it in the dumpster.  Sometimes revitalizing what already exists is more rewarding than simply discarding it and starting over.  Ultimately I was very happy with how it turned out.  We even decided to put in Quartz counters instead of Granite simply because the all white counter would go well with the gray.  To be honest, the more I am following home trends, the more I keep reading that granite is becoming an antiquated look.  People prefer are more monochromatic appearance and granite just doesn’t give you that due to the composition of the stone.  In our Coram colonial, I decided to go with Quartz as well as I hate being on the wrong side of a decorating trend. 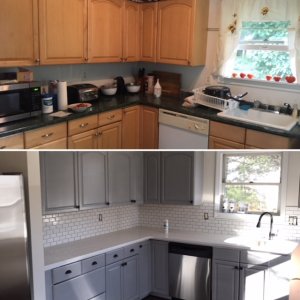 As far as timeline is concerned, I was hoping to have the house on the market before Christmas, but it just didn’t work out that way.  I recently started working with a new contractor, and he was finishing up some other projects before he began this one so that lead to a delay.  Add in the holidays and the bad weather coupled with an increased scope of work, and you find yourself putting the house on the market weeks later than when you wanted it.  In the end it really isn’t something to get overly worked up about.  The contractor did a great job, and while I was getting a little tired of hearing his “We’ll be done next week” routine for three weeks straight, he was meticulous with his work and that’s what I prioritize.

How Much Did This Rehab Cost?

Originally I was expecting to spend about $35,000 on the rehab.  This I knew was out of the question when we decided to embark on our sprawling bathroom venture.  The vanity alone was almost $1400 which is crazy to spend on a home that we are only listing for $289,990, but I knew that the space would be incomplete without the perfect double vanity.  We also had to replace a bunch of windows and put in a small retaining wall on the side of the house to divert any oncoming water.  In the end we spent $40,000 on the rehab which included the following:

Interior paint throughout the whole house

Could I have done this rehab cheaper and faster?  Sure, but the end game is quality not quantity and cheap work.  The downside to this home is that it is up on a hill (hence the House on the Hill nickname) so stairs are a bit of an issue.  Also because the house is up high, you get a fair amount of privacy as a result so there is a give and a take in that regard.That said this home has exceptionally low taxes ($6000 which are actually $5000 after the NY star discount).  Yes for some that seems like a lot, but in Long Island that is quite a bargain.  This allows us to ask more for the home as one’s payment is substantially lower than it would be if the taxes were the normal amount of $8000.    Ultimately with 3.5% down with an FHA loan, you likely will be under $2000 a month for your total payment (mortgage, taxes and insurance), and that does not include the tax savings a house will bring you.  You would have a very hard time renting a home with these kind of amenities for $2000 per month.