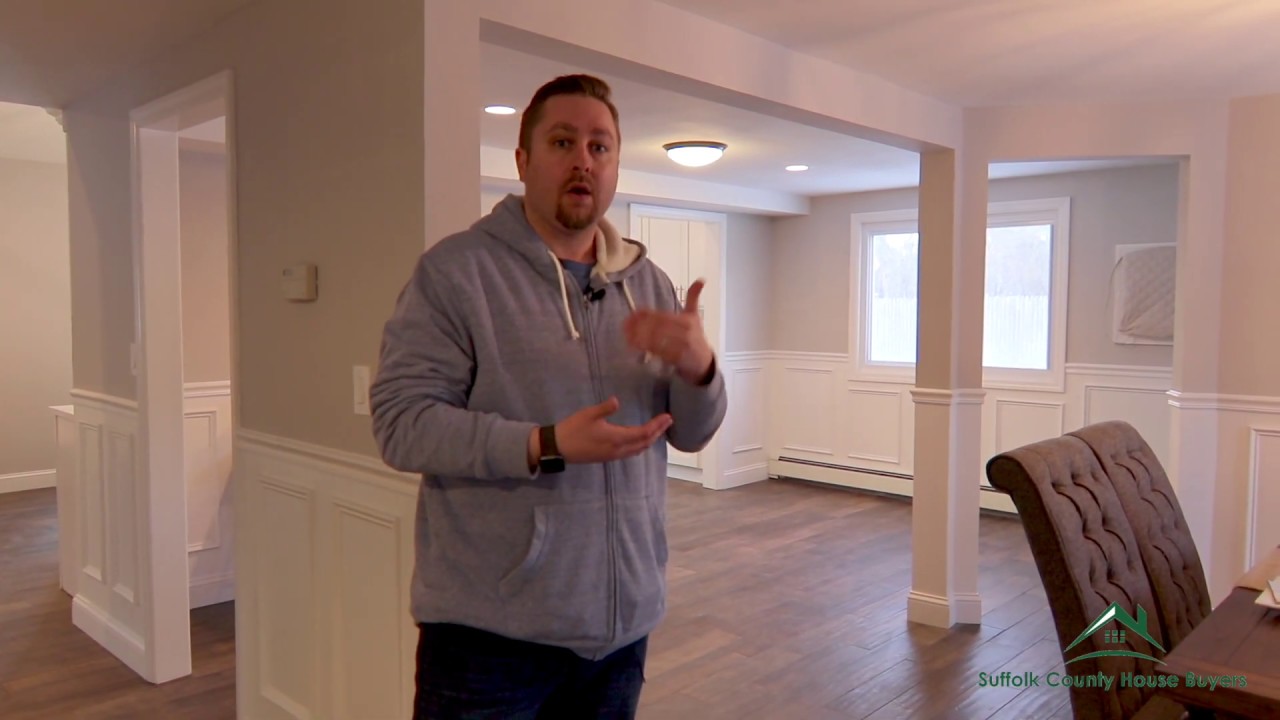 Jeremiah Dalton:            00:05                  All right. So, we’re standing outside a flip that’s completely finished, all done, on the market. 58 Osborne Avenue, Mount Sinai. We’re listed for 479. This house has been completely redone on the inside. One of the things that’s great about this house is the fact that Mount Sinai schools are fantastic, but typically the taxes in Mount Sinai are very high. This house, the taxes are 10,600. Now, for people outside of Long Island, that seems ridiculous, but actually in Long Island, especially for Mount Sinai, it’s very, very reasonably priced. In fact, these taxes I’d be willing to bet for this size house are probably some of the lowest in all of the town.

Jeremiah Dalton:            00:45                  All right. So, let’s go inside because I promise you this is a jaw dropping flip. All right. So, we’re inside the house now, and as you could tell, the house has actually been staged. Now, we typically don’t stage houses, but that said, we felt that given the price point and the layout of the home, that it would be advantageous to stage it. So let me just give you a little bit of background on this house.

Jeremiah Dalton:            01:10                  This house was owned by a brother and sister, very nice people. Unfortunately though, they had a big trash collection problem and if you could believe it, floor to ceiling garbage just about everywhere you could see. You really couldn’t walk in the house. I mean quite frankly, we’re doing a little episode on flipping, you could have done an episode on hoarders before we got to this house. But, that said, one of things they wanted was they wanted a quick closing, they wanted to leave it as is, and they wanted to start over and move down to Florida, so that was something we were able to provide.

Jeremiah Dalton:            01:41                  In any event, let me give you a little tour. So, this is like your dining room area. In here, I feel as though you could kind of do one of two things. You could have made this a dining room area, that a living room area, but in this case they staged it as sort of like a quasi-workspace. Let me take you through the kitchen because that’s probably the highlight of this. So, we got a big, open kitchen. We put sliding glass doors in. Obviously, in here you got your living space and not a real T.V. of course but you get the idea.

Jeremiah Dalton:            02:16                  Kitchen, for the most part we’re always doing the white shaker style cabinets. We switch up the hardware. We went with the gold. It was something actually my wife wanted to do, so obviously when the wife says you gotta do something, you have no choice but to acquiesce. So, that’s the kitchen there. People have been really, really loving it. With the raised living room kind of makes this house what they call more of  than traditional colonial, but that said, having the separated space a lot of people really like.

Jeremiah Dalton:            02:45                  So, let me take you upstairs real quick and I’ll show you the bathrooms, give you a quick little overlay of the bedrooms, and then we could wrap it up. So, we got in here a completely redone bathroom, oversized vanity. We staged the bedroom here which for one reason or another just kind of gives you an idea of what you could do with this space. Like I said, staging I think it’s got to be suited for the right home. They obviously did an excellent job here, but like I said, we typically don’t stage stuff. It’s not like what you see on HGTV, but if the need calls for it, we will do it.

Jeremiah Dalton:            03:28                  So, let me just take you down. You get a shot here of the living room, so that’s really cool. Like I said, this is a well priced home, beautiful area, beautiful street. We redid everything. We put the best finishes that we possibly could into this, so ultimately any buyer who gets this property I think is really going to be very, very happy.