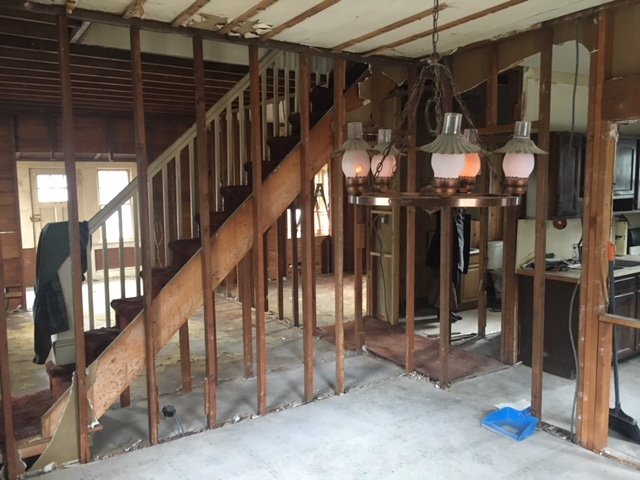 Last month, our team picked up another flip through our direct marketing campaign in the lovely town of Sound Beach New York.  This particular house fits right into the profile of the type of properties that we buy.  A house in need of work, but in a nice area that would appeal to a young family.  It is right near the beach, and with enough work the old charm coupled with a modern flair will really make this house very special. The owner was one of three siblings, and had lived in the house all of his life.  Unfortunately over the years, the condition of the house deteriorated greatly.  As a result, he no longer had any desire to live in the home anymore and was willing to take a cash offer.  This particular house has a lot of potential, but sometimes potential can be a polite way of saying it needs a lot of work.  I would have to say that in this case such a statement holds true.

How Did We Base Our Offer?

When I first went to the house, the gentleman couldn’t be any kinder.  He immediately made it clear that he had plans to move into his nephew’s basement apartment which was in the process of being renovated.  He wanted out and he wanted out fast.  The condition of this home was not suitable enough for a conventional mortgage.  If someone was going to buy it, it was going to be an investor or at least someone with cash.  I wanted to give this gentleman the best offer I could so after seeing the condition of the home, I quickly conferred with my broker to come up with an appropriate ARV, but the repairs were a little more difficult to determine.  I didn’t want to throw out a tremendous repair number, and risk the chance of undercutting the seller too much so I brought back my contractor to narrow down the construction costs.  We both agreed that the house had to gutted from the inside out.  We figured about $90,000 in repairs to replace everything.  The only thing we would keep would be the roof and maybe the siding which surprisingly was in good condition which is rare in situations such as this.  I also needed to spend about $5,000 in landscaping.  With a $95,000 repair cost, and a $300,000 ARV, we made an offer of $120,000 which after some back and forth we ultimately settled on that number.

How Long Did it Take to Close?

Believe it or not, for a cash deal this took almost 2 months which is not typically the case when we buy houses.  The problem was that the house did not have a Certificate of Occupancy on record.  A lot of the records in Sound Beach were destroyed in a fire some years back before everything was electronic.  As a result I had to get a survey done of the property, submit an application to the town, have an inspection and actually get a permit for an existing deck for them to issue what is called a Certificate of Existing Use (CEU).  This essentially states what the house is as far as its current condition, and leaves a very general description of the house, but at least that is something a title company will insure.

What Work Needs to Be Done?

Well take a look at the photo above, and you’ll realize just about everything!!  We are adding a rear dormer to the 2nd floor to match the front dormer simply because the bedrooms are much less functional in their current condition.  The sloping roof on the 2nd floor of this cape cuts leaves a very low ceiling when you first walk into each bedroom so this will create more space in the rooms and also leave us the ability to put a full bathroom upstairs which is huge plus for couples with children who occupy those rooms.  Obviously as you can see are gutting this house down to the studs so this house will have new electric, plumbing, floors, kitchen, 2.5 new bathrooms and we are also finishing the basement.  Pretty much the entire interior is being transformed.  We are also changing the layout of the house which requires us to take out some bearing walls to open up the floor plan a bit.  We are trying to give the house a bit of a beach vibe due to its proximity to the water.

How Long Will The Work Take?

That’s the million dollar question.  We bought this house early last month, and while we have been on it for a while, there has not been as much progress as I would like but that’s what happens when you have multiple projects at once.  Changing the layout certainly takes time and adding the dormer and redoing the plumbing is no small challenge so I anticipate by late April to early May we will be finished.  Short of doing new construction, this is about as much work you can do to an existing home so I’m excited for the challenge and also for what I know will be an amazing finished product.  I hope you stay tuned and feel free to follow our progress on Instagram as well as here on the website.  Thanks for reading.